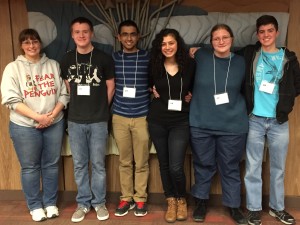 Centerville High School beat North Allegheny Senior High with a victory of 95 to 57, making this their third win at the Penguin Bowl since they began competing in 2007. Eleven schools and sixteen teams competed in the thirteenth annual Penguin Bowl on Saturday in Kilcawley Center.

“We’re excited [we won], and we’ve been working really hard for this,” said Beth Cahill, one of Centerville’s two coaches. “I am so proud of these kids, and they deserve it for how much effort they put into it.”

“We’ve been looking forward to this for a very long time,” Brockman said. “We’ve been preparing for the past six months, reading up on oceanography, and for the past two weeks we really buckled down. We did buzzer practices for hours and hours.”

The Penguin Bowl is part of the larger National Ocean Sciences Bowl (NOSB), which was originally started in 1998. The NOSB offers participating students scholarship opportunities, experience working with other students in various competitive settings, and, this year, a sleepover at the OH! Wow Science Center.

The two teams were neck and neck after the first round of multiple choice questions, tied at 24 points. After the essay question portion of the competition, Centerville gained their lead, the score sitting at 47 to 57.

“[Being tied] was intense. I didn’t know if we were going to be able to pull it off,” Brockman said. “We played [North Allegheny] earlier in the day, and we actually lost that round. It was the same situation where we were very, very close at the half. I was really hoping the same thing wouldn’t happen twice, and it didn’t.”

This year’s Penguin Bowl was dedicated to Zach Doherty from Lake High School who was killed while hiking at Hocking Hills State Park in August. Zach competed in the Penguin Bowl for three years.