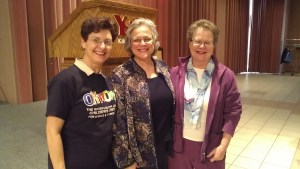 The keynote speaker, astronomer Dr. Pamela Gay from Southern Illinois University at Edwardsville, gave an exciting presentation on the history of space exploration and how students have contributed to scientific discovery in the field.

After the talk, the students attended panels where professional women who are working in science and engineering discussed their careers, their training, their lives and the highlights of their jobs. A number of the panelists were YSU graduates, emphasizing the quality education in STEM available at YSU. In the afternoon, STEM faculty and other professionals led a variety of hands-on workshops that allowed the students to experience science and engineering in action. Two new workshops were added this year. The girls built motors and learned about electricity in one and used protein chemistry to identify a suspected criminal in another.

More than 35 Youngstown State University graduate and undergraduate students volunteered their time, helping in workshops and acting as chaperones. This year’s program was enhanced through an endowment from the Edward W. Powers Foundation, which allowed for increased activity, broader workshops, and more well-known speakers.

Not only was this the largest group of participating girls we have had, but they were also very engaged. This shows that word is getting out about the career day and also that area schools are increasing their emphasis on science and technology. We are already looking forward to next year’s program and hope to continue to build on this year’s success.