It’s pretty commonplace for each of us to have cell phones, a computer, and an internet connection. In order to get information to these devices at the user end, much of the information has to be sent through wires or wirelessly. But many people don’t realize that, even with wifi, most digital information is moved as light in fiber optics. Drs. Jim Andrews and Mike Crescimanno, both professors in the Department of Physics & Astronomy, are looking at new ways of manipulating that light.

“Transmitting information via light is more effective than transmitting it via electricity, but processing it as light has always been a challenge,” said Andrews.

Essentially, Andrews and Crescimanno are looking to control light with light, instead of another means of energy. 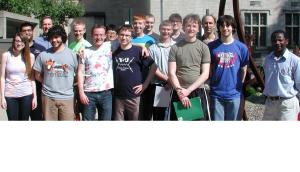 “It was one of those things that we came up with, and I really wanted to push it a bit further,” said Crescimanno. “When you pick up an old-fashioned telephone, there’s a wire that goes to the wall, and guess what happens? When the signal in the wire goes into the wall and goes to the bottom of the building, it gets converted to light and sent into fiber optics.”

Currently, information being transferred via light has to be converted into electricity and then converted back to light at every branch point along its path. Andrews and Crescimanno are working toward not having to convert the light to electricity, but instead having the light control other light directly by changing its polarization, that is, the direction of the light’s electric field, transverse to its propagation direction.

“So what we’ve done,” Crescimanno explained, “is thought very critically about how to change the polarization of light in a device more completely and efficiently. We’ve been looking rather critically at combining the existing methods of rotating the polarization of light by using wave interference in a process we call ‘coherent perfect rotation’.”

By harnessing the power of light and cutting out the middle step of converting the light to electricity, this makes for a more efficient and more cost effective way to transfer information.

Andrews and Crescimanno are working on this research with Dr. Chuanhong Zhou of the physics department and several students. They received support for this work from the National Science Foundation through a $129,750 Early concept Grant for Exploratory Research, or EAGER.