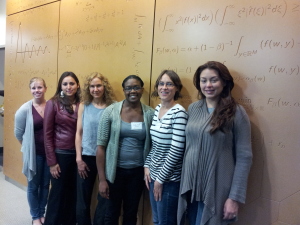 Assistant professor of math Dr. Alicia Prieto Langarica is teaming up with five other women from around the world to look at how temperature affects sleep patterns.

“Sleep is really interesting, and there are a lot of things that everybody shares, but it is also extremely stochastic since it varies a lot,” said. Prieto Langarica. “So sometimes you don’t sleep very well, or you find a different position, or you just sleep different. But between people, it’s even more different. Some people need more sleep from other people and some like colder temperatures than others.”

Dr. Prieto Langarica explained that while awake, a person’s body spends most of its energy on thermoregulation. While sleeping, once a person has their rapid eye movement sleep, the body stops its thermoregulation.

“If we don’t get REM, things get bad in your mind, and we get real tired and things like that. But we cannot get a lot of REM because when you are in REM you are not thermoregulating, meaning you’re like a lizard,” she explained. “So when we’re in REM, we cannot maintain our body temperature, so it starts drifting to whatever the ambient temperature is.”

While the exact reason for shutting off thermoregulation isn’t known, she said that a doctor came up with a theory that says the energy normally used for thermoregulation is instead used for other necessary processes, such as saving memories and growing.

“You need that energy to do all these processes that you need to do once a day, like saving your memories, growing — most of the growing that you do when you’re a child and even when you’re an adult happens during your sleep — you change your skin all the time, your bones are remodeling, everything,” Dr. Prieto Langarica said. “Most of those processes happen while you’re sleeping, and you’re turning off your thermoregulation so you have all this other energy to file everything in our head. “

Dr. Prieto Langarica went on to explain that even in very similar conditions, a person sleeps differently, and while most people believe the temperature in the room matters, it’s actually the temperature between the person and the sheets that matters.

“The temperature, what we call the distal skin temperature, is the temperature right above your skin. So for example some people like it cooler because they like more covers, but they’re actually achieving the same temperature as the guy who keeps it warmer but is sleeping in shorts without covers,” she said.

The group’s first manuscript on the study has been accepted, and they are working with Dr. Markus Smith on the function of sleep on mathematical models.