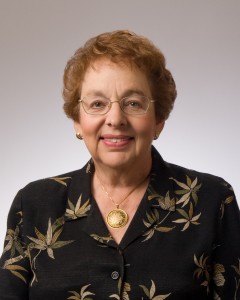 For her 250th paper, Dr. Del Bene arranged her publications so that her only paper that didn’t tell of her research in theoretical chemistry would be about her mentor, Dr. John Pople, whom she worked with during her second postdoctoral fellowship, and also during her first sabbatical from YSU. Dr. John Pople was named the 1998 Nobel Prize recipient in chemistry for work done while he was at Carnegie Mellon University.

At the time, Dr. Del Bene was one of the few professors that was doing research and publishing articles. “When I joined YSU, I made it known that I wanted to do research,” she says. Due to the technological requirements, theoretical chemistry was very difficult to do outside of the university environment.

Much has changed at YSU throughout the years and Dr. Del Bene spoke of how much technology and theoretical chemistry have changed along with the university. There were punch cards and multiple calculations, along with late nights in Maag Library, but now with the addition of the Ohio Supercomputer Center, located in Columbus, Dr. Del Bene can do her research at home. Two theoretical chemists and a physicist started the Ohio Supercomputer Center, which just celebrated its 25th anniversary. Dr. Del Bene was the third chairperson for the OSC.

The main focus of Dr. Del Bene’s research is quantum mechanics of molecular systems. As a theoretical chemist, Dr. Del Bene has always loved asking the how’s and why’s in life. Since her retirement in 1999, Dr. Del Bene has taken a “permanent sabbatical,” in which she travels, takes pictures, and collaborates on different projects. Currently, she is collaborating with a group of scientists from the University of Madrid, in Spain and the Consejo Superior de Investigaciones Científicas (CSIC), or The Spanish National Research Council.

Dr. Del Bene has more publications coming out this year, but with number 250, her fifth set of articles has been bound. Besides the occasional visit to campus, Dr. Del Bene will continue to write, photograph the different countries she is in, and research in her pursuit of the how’s and why’s of the world.